Trust These Hands​.​.​. Are Worthless. 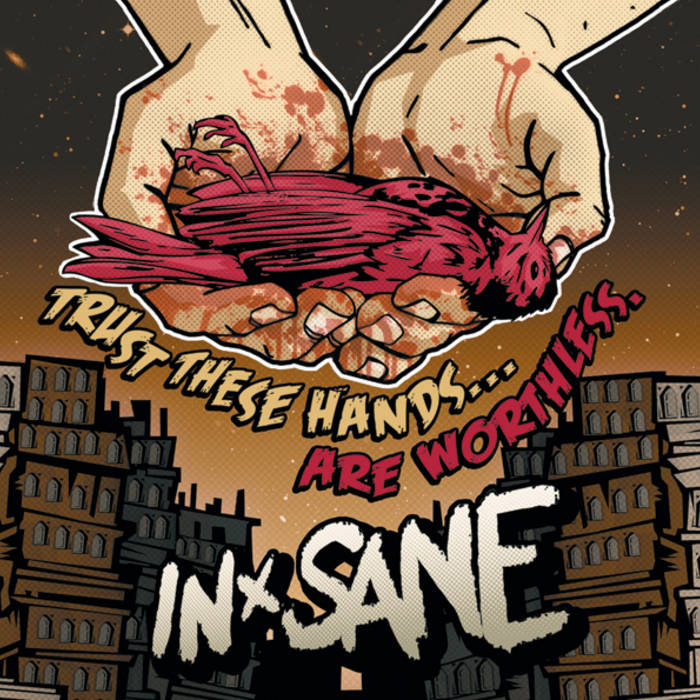 The origins of IN-SANE go back to the year 1997 in Gornja Radgona, Slovenia, where a bunch of kids who were into punk rock formed a band heavily inspired by NOFX, Bad Religion and Millencolin. The early years of IN-SANE featured some personell changes, but they eventually formed a steady lineup - Dario (guitar, vocal), Máteja (bass, vocal) and Shaggie (drums). Soon they started to follow their own path, creating their own approach to punk rock, which got labeled as heart-core.

In 2005, after a few demo recordings, IN-SANE self-released an excellent debut entitled "Keeping Ourselves Close To Our Hearts", which made it possible for them to play many shows all around Europe. Not missing the chance, in the last 5 years IN-SANE have relentlessly toured Europe, broadening their fan base. They finally made it to a point where the need for the next step was necessary, and then Mr. Moonlee came along... Charmed by their dedication and enthusiasm, he offered cooperation which led to "Trust These Hands… Are Worthless.".

The album "Trust These Hands… Are Worthless." was recorded by IN-SANE in their own DIY Life Trip Studio, while mixing and mastering were done with the help of Aco Razbornik in Studio Tivoli. The record is a result of cooperation between various European independent record labels: Moonlee Records (Slovenia), Fond Of Life Records (Germany), No Reason Records (Italy), Shield Recordings (Holland) and Bad Mood Records (Switzerland). This way, IN-SANE and their new album will be presented to potential listeners in the most efficient way all around Europe, giving them a good chance for a bright future.

On their new record, IN-SANE remained loyal to their own formula of energetic punk rock, enriched with plenty of hardcore/emo/rock elements and rhythmical twists that give their music special dynamics and charm. The mix of catchy melodies, sharp guitars, thundering bass, fast raging rhythms and breakdowns, along with dual screaming and singing vocals doesn't leave any room for indifference. On the contrary, it will grab you, suck you in and make you ask for more. IN-SANE take the best features from bands like Against Me, Hot Water Music and Propagandhi and combine them into a new and catchy whole.

IN-SANE represent all that punk rock should be about – energy, dedication, passion and, of course, D.I.Y. ethics. Listen to their new album "Trust These Hands… Are Worthless.", let yourself go, raise your fist and sing along!

Recorded and engineerd by Dario Solenički at the DIY Life Trip Studios, Verd, Slovenia in July/August 2009.

Produced and mixed by Dario and Aco Razbornik at Studio Tivoli.

All songs written, arranged and performed by IN-SANE.
Except "Mrtev Policaj" (writen by The Fat Nuns in '95).
Didjeridoo on "A New Sun Will Rise..." by Saš Serban.
Additional vocals on "Amplify The Words" and "Mrtev Policaj" by Mato, Saš, Miša.

Artwork and layout by Christophe at KarmaOrange.com